A traditional kilt can at all times be explained and understood. And so can a utility kilt, even if not always to the same degree. With a man skirt you at least can claim it to have been made for men, but taking the step to a skirt from a women's store your reasons might be less comprehensible.


Regular skirts you can, in theory, find just around the corner. But you shall probably soon realize that only very, very few skirts, designed for women, are suitable for a man to wear, does he emphasize a masculine appearance. "Boyfriend" style in women's fashion might be a possibility, but is not always hype and available. And kirts, fashion 2020, often are way too feminine, due to fabric and length.  And then there is the size. Men are bigger than women. And clothes meant for big size women seldom look smart and are often extra feminine to compensate for the size.  Add to that, that women's fashion, thase years, tend to focus on dresses, rather than on skirts. Now you are warned.

A wide skirt (A-line or wrap) with a fly on the front. The fabric should be rather coarse like denim or cotton. A "manly" colour like blue, black, grey, olive, khaki etc. is to prefer. Pockets (even if often not deep enough to be usable are fine too; and so are belt loops. About knee length (like a kilt) should be fine or somewhat shorter.

Men might without any problem at all - at least when among strangers - wear for example denim skirts made for women, provided anything else looks definitely manly, including the aura of the wearer himself. 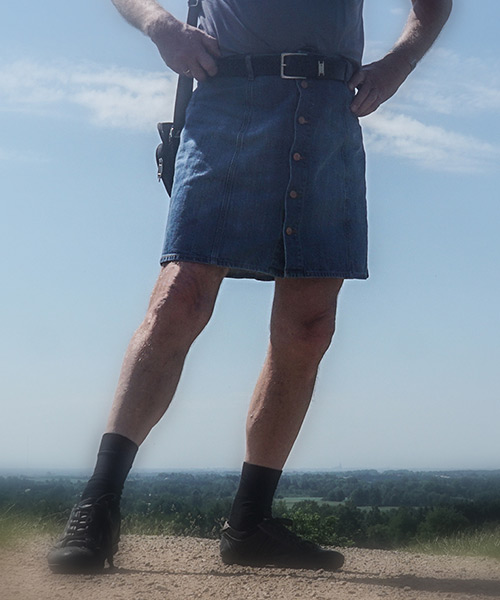 The skirt must not be "blue jeans blue".

(Because femme) pencil or otherwise tight skirts, skirts with slits, light weight fabrics, most patterns and details only meant for decoration; the same with skirts closed at the back or to the side.
Due to anatomy a man's skirt cannot possible be as short as that of a woman. Too long, and/or too narrow, and the comfort argument cannot be used.

Do I need to say, that you should now and forever forget about high heels, shaved legs, and other items connected with women’s wardrobe or looks? It takes more than a proper skirt to appear femme, but not that much more!

I think that men, putting emphasis on a manly appearance, should in general go no any further than to the man skirt. But the few possibilities taken into account, proper skirts designed for women might be included, like, about ten years ago, the Californian lawyer, known as WDP/Braveheart" did.
But else, leave women's clothing to the ones they were intended for - and to men having no other choice, but wearing female stuff, shall they feel happy.

If or when wearing a regular skirt, make sure your appearance is otherwise strictly manly. That's my opinion, my advice.


When in such skirt, stand up to it. It has been your decision, your choice. Never try to excuse that you are wearing it. Never look guilty or like had you a bad conscience. It is not a crime. Show to the world that you are man enough to pull that skirt. Wear it with confidence.


Some pictures have been found on the internet, and in some cases it has not been possible to ask permission to use them. If not, they have been edited in order that no person can be identified. Should you have the rights to a photo used here and you don’t want it to be published, e-mail me, and I’ll remove it.

What to find on the Dress2kilt site

Have you ever been thinking of wearing a kilt, but have given up, because you were not Scottish? You must not be Scottish. You can be any nationality, any colour, and any belief. Only you must be man enough. The objective of the Dress2Kilt site is making you wear a kilt whenever YOU feel like it and appropriate. Without needing a special event. It is about kilt causal-first.

Who will wear a kilt? Don’t I have to be Scottish? Why wear a kilt? Where and when to wear it? What’s the difference between being Scottish and not? What shall other people say? Is it true? How did the webmaster start wearing kilts? These and many more questions are answered.

Is the kilt a skirt? Scotsmen will say NO. To them and very many kilt wearers the kilt is a kilt, and not a skirt. And exclusively a man's garment. Calling the kilt a skirt is accordingly considered an almost unforgivable insult. But is it nevertheless a skirt?

What makes a kilt? How much fabric? Are 8 yards of fabric a must? Or will less do? How about tartans? How is a kilt constructed? Straps and buckles, fell, rise, pleats, length, drop. Are you allowed to wear a clan tartan, if you have no connection to it?

Purists will say that no less than a 16 oz. 8 yard wool kilt, sewn by hand by a skilled kilt maker in Scotland or equivalent place will do. But that’s a bad advice, at least unconsidered. Read why. And get suggestions for where to find which kilt.

How to buy a kilt?

The buying process itself is quite simple and almost the same by all vendors. But what might look a bit complicated, is getting size and measures right. Especially the length. It isn't difficult at all. Read on, and you'll know how to do.

Don't get ripped off on things you don't need. Find out, which accessories are must-haves, which are nice to have, and which you shouldn't consider at all for casual and smart casual wear, and not even for dress-up events.

Let’s assume you have just received and unpacked your first kilt, and the accessories you ordered. How to handle all the unfamiliar things, the sporran, the belt & buckle, and kilt socks etc.? And what else to wear with your kilt.

Now being ready for taking your kilt out into public for the first time, is there anything you should mind? Something to be afraid of? After all a kilt is something very different, just the way it looks and how it feels, wearing it.

Let’s be realistic; most likely, you cannot wear a kilt 24/7, even if you should want to. Probably your job is an obstacle. Due to conventions or dress code. But you have 52 weekends a year plus vacations and other holydays...

Not all men, tired of always wearing trousers, are finding the traditional kilt the best skirted garment. They might prefer a garment less Scottish and with fewer rules to follow. Or they simply consider non-traditional kilts an addition.

Could you as a man wear a skirt? Instead of a kilt or on some days kilt, on others a skirt? Well, the existence of utility kilts with their non-defined designs are part of the answer, so YES, you can. Skirts on men make sense. And skirts for men are to have.

Skirts designed for women, but manly enough for men to wear. Could you, by still maintaining a manly appearance wear a skirt from the women's section? Well, it depends. But let's see.

Show to the world that you are man enough to pull that 'skirt', whether a traditional tartan kilt, a solid-coloured kilt, a utility kilt, a skirt designed for men, a unisex skirt or one simply looking manly enough to also be worn by men.

Kilts in 31 different tartans, listed alphabetically, plus solid-coloured kilts, utility kilts, man skirts, 'manly' skirts, and pages with a mix of kilts and different skirts - The Braveheart Way'. Altogether more than 50 pages and over 900 pictures. With the only purpose to convince YOU to wear a kilt - or another skirted garment - on a regular basis, without you having a special reason.

Vendors of traditional kilts, from cheap, typically imported Pakistani kilts, whether off-the-peg or custom-made, to more expensive kilts, sewn to-your-measures in Europe or in America.
Vendors of accessories.
Tartan-mills and tartan-finders.

Kilt and skirt forums, non-commercial home pages, blogs, picture galleries, videos, articles in print media and on the internet, men in kilts and skirts on stage and on the cat walk.

At a glance, find out what is new, has been changed or has been deleted on the D2K site since your last visit.

Reflections in a kilt