Every man can wear a kilt, everywhere, any time..


How about a kilt?


Have you ever been thinking of wearing a kilt? But have given up, because you were not Scottish? Or you thought it to be too complicated or could think of no place to wear it? Or that it might just be too expensive? You might have to think again. As a matter of fact, these years an increasing number of men all over the world, no matter their nationality, colour, heritage, belief, sexual preferences or whatever will buy and wear a kilt; and not just at events that too seldom occur, but as smart casual daily wear. And so might YOU. No need to be Scottish, just man enough.

Traditional kilt wearing is often regarded complicated with lots of rigid rules. For formal wear situations this might be very true. And most sites about kilts and wearing of them, as well as kilt forums do have their starting point in formal wear.
This site, however, is not about wearing a kilt once or twice every second year for that wedding or that anniversary you are not invited to anyway. It is about replacing jeans, pants, and shorts by a kilt and to wear it where and whenever you feel like it and appropriate. It is casual-first.
This implies buying kilts for this kind of usage. The same with accessories. You need very few. Even if that many different ones are to buy.

A few easy steps to go through and you can be out and about in a kilt, without being ripped off. And really be out and about, not just thinking about wearing that kilt. This site is about kilt wearing made simple and straight forward. Casual-first. The non-Scottish approach to kilt wearing, you may say. 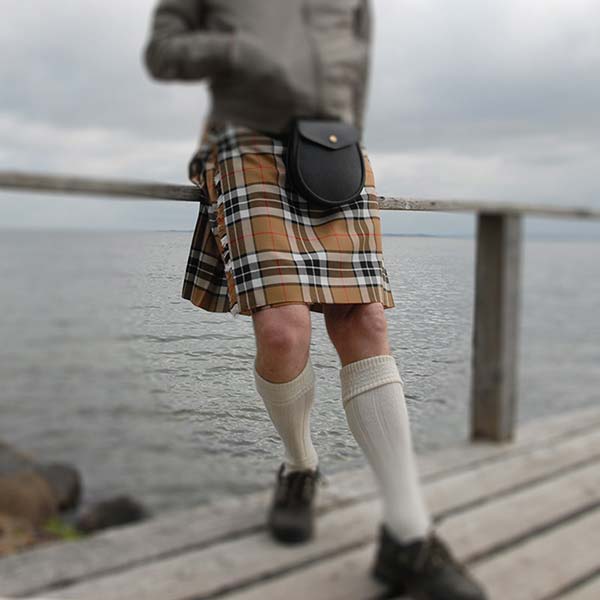 Not just the traditional kilt

Focus is of course the traditional tartan kilt. But for some tasks a so-called utility kilt might be a better choice. And why should a kilt be the only skirted garment a man can wear? In fact, skirts designed for men are to buy.
And even a skirt made for women might be acceptable. 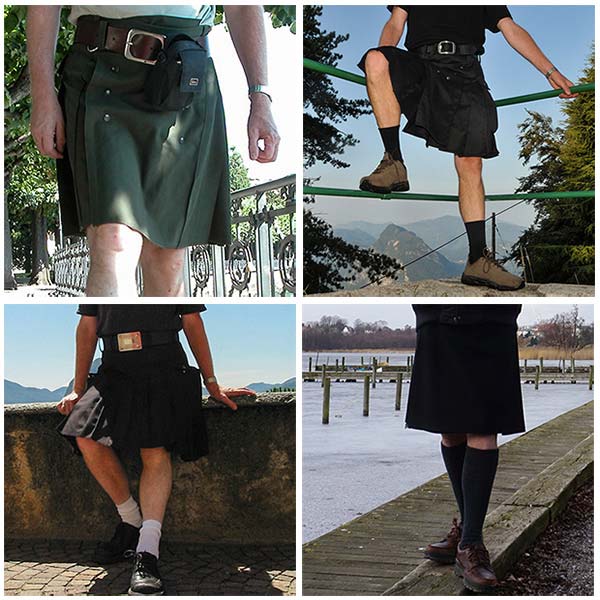 Not just the traditional kilt.

The more we are, the better

So, despite this is a kilt site, other skirted garments are also dealt with. The more we are who will wear a kilt – or, in a strictly manly way, other kinds of skirted garments - and the more often we'll do it, the better and sooner it shall be accepted to the full that pants are not the only possible legwear for a man.

The Dress2kilt site so to speak follows the thoughts of a Californian lawyer, known as WDP/Braveheart, who at the beginning of this century introduced the MUG concept - Manly Unbifurcated Garments, meaning kilts, kilt variations (utility kilts), man skirts, and other male unbifurcated garments (sarongs and "manly" skirts).

Men wearing them he called Bravehearts, in opposition to Freestylers, being men having no interest in appearing manly and who will accordingly often or always wear and prefer every female garment over men’s clothes and shoes.

That there are men who prefer looking like women or wish they were women, we all know and should deeply respect. Only, here on this site it is about men in general, who might just want to wear a kilt (or another skirted garment).
'Men in general' is the most neutral description I have been able to come up with, in the hope of not insulting any persons or groups of persons, because this really has not been my intention.
'Normal' men could have been misunderstood, 'ordinary' men might be connected with really average men in a negative sense, and 'real' men I don't like. Too much macho. But these days you must be extremely careful with your language. 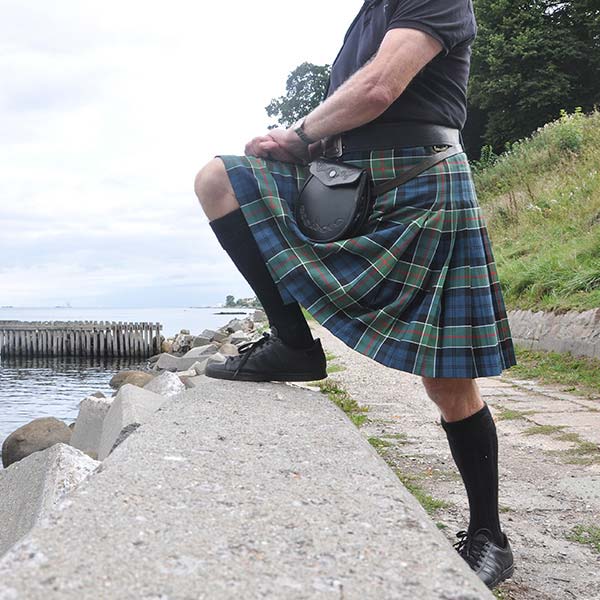 The person I have had in my mind when making this home page is, like me, a European without Scottish roots. But in fact, you can live everywhere, have any nationality and colour or whatever. Either you have no kilt yet, or you have a kilt which you have not yet dared wear outside, or you think you need a special event to wear it, but should like to wear it more often. 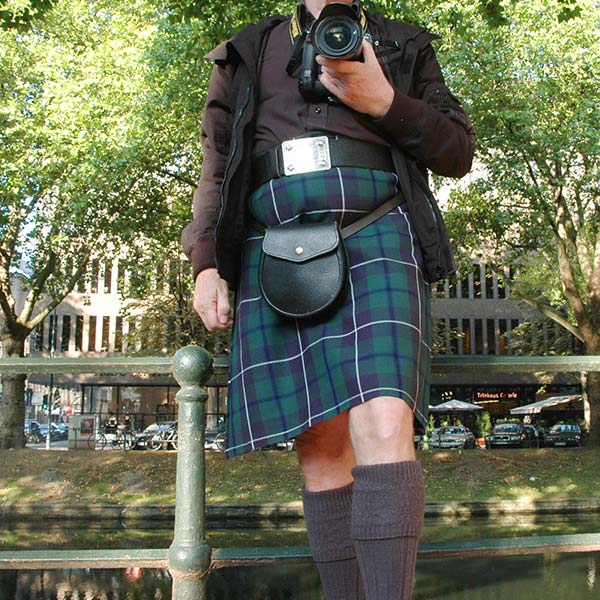 Convince men that wearing a kilt - or another skirted garment a strictly manly way – is a non-event, something they can do whenever they feel like it and appropriate.
And that it neither has to be a science to wear a kilt nor expensive.


In English and German languages

The Dress2Kilt site is in English and German - even if neither language is mother tongue of the webmaster; but hopefully, this is not too disturbing or distracting from the main objective, to inspire more men to wear kilts (and other skirted garments a manly way) more often.

D2K is a no-nonsense, non-commercial, non-profit website, with nothing to sell or buy. And with no disturbing third-part advertising.
It does not use cookies. It does not request any registration, nor does it collect any data from you, whether tentative or not. Not even a contact formula is here. If you should wish to tell or ask me something, write me an e-mail the good old way. The address is to see at the bottom of each page. Here you can feel just as free as when out and about in a kilt.


All you can find here is advice, on kilts and on buying and wearing kilts; or on some appropriate skirts. And this is for free. Enjoy!

Who will wear a kilt? Why wearing a kilt? Where and when to wear it? What’s the difference between being Scottish and not, related to kilt wearing? What about surroundings? Is it true? These and many more questions are answered here.


What to find on the Dress2Kilt site?

Have you ever been thinking of wearing a kilt? You must not be Scottish. You can be of any nationality, any colour, and any belief. Only you must be man enough. The objective of the Dress2Kilt site is making you wear a kilt whenever YOU feel like it and appropriate. Without needing a special event. It is about causal-first kilt wearing.

Who will wear a kilt? Why wearing a kilt? Where and when to wear it? What’s the difference between being Scottish and not, related to kilt wearing? What about surroundings? Is it true? These and many more questions are answered here.

How come that the webmaster started wearing kilts? When was it? How was it, wearing a kilt for the first time? How were reactions from his wife, his family, neighbours, and other people?

You in a kilt?

When seeing you in a kilt, what should people say? And especially your significant other? And the ‘Kilt Police’? Shall people think you are Scottish? How about prejudices? Should you tell people you know that you have started wearing kilts or are about to do it? How do you tell them? What should your reasons be? See answers to these and many other questions here?

Is the kilt a skirt?

Scotsmen will say NO. To them and very many kilt wearers the kilt is a kilt, not a skirt. It is a garment of its very own, they say, and exclusively for men.
Calling the kilt a skirt is accordingly considered an almost unforgivable insult. But is it nevertheless a skirt?

What makes a kilt?

Are 8 yards of fabric a must? Or will less do? How is a kilt constructed? Learn about straps and buckles, fell, rise, pleats, length, drop.


Buy a kilt and accessorize it

Must a kilt be expensive?

Yes, purists will say, because no less than a 16 oz. 8-yard wool kilt, sewn by hand by a skilled kilt maker in Scotland or equivalent place will do. But are they right? Read why they are probably not.

Probably most kilts today are no longer sewn in Scotland, but in Pakistan. In common these "imported" kilts have that they are affordable. Some shall give you real value for your money, others little - or worse - no value. Read about where to find good, nevertheless cheap kilts.

Some established Scottish and American kiltmakers know that affordable kilts are the condition for having men start wearing kilts, especially those having no Scottish roots. They therefore offer some very good kilts which they will position as casual kilts, probably for not hurting the rest of their business. For casual wear they might be all you need.

You'll hardly get an 8-yard kilt in pure new wool for under £300 or the equivalent. It shall be much easier to find one costing twice or three times as much. Not all premium priced kilts are sewn in Scotland. Examples are USA, Canada, England, France, and Austria.

Get the measures right

Buying your first kilt is something quite unusual. Most likely you shall buy it online, and often it shall be made to your measures. Buying a kilt is not difficult, however, and with a kilt there is some give and take. Read on, and you'll know how to make it right.

Don't get ripped off on things you don't need. Find out, which accessories are must-haves, which are nice to have, and which you shouldn't consider at all for casual and smart casual wear, and some not even for dress-up events.

Let’s assume you have just received and unpacked your first kilt, and the accessories you ordered. How to handle and wear all the unfamiliar things, the sporran, the belt, the socks, the flashes etc.?
What else to wear with your kilt?

To mind when in a kilt

Now being ready for taking your kilt out into public for the first time, is there anything you should mind? Something to worry about or calling for your attention? After all a kilt is something very different, just the way it looks and especially, how it feels, wearing it.

Let's be realistic, you cannot and probably you should not wear a kilt every day year riund. But having chosen to consider your kilt casual-first wear there are so many possibilities year round. Read on and get inspired.

Utilty kilts have existed since 2000. Judged from the number of vendors who are offering them, the market for these kilts must be big.They come in very many different designs, some better than others.

Kilts can also be solid coloured, or come in a camouflage pattern. They can be made of tweed, denim, or leather. They can be traditional in style, or their design can deviate to the extent where they become utility kilts - or skirts.

Could you as a man wear a skirt? Well, the existence of utility kilts with their non-defined designs is part of the answer. You can. Read about which to go for, if a skirt.

Hopefully, visiing this site has contributed to bring you an important step further. Now show to the world that you are man enough to pull that kilt or skirt, whatever it is.

Links to altogether over 50 gallery pages with tartan kilts, utility kilts, other kilt variants, and skirts.

Hundreds of kilt pictures on over 30 pages, one page per tartan.

A mix of skirted manly garments.

Vendors of traditional kilts, from cheap, typically imported Pakistani kilts, whether off-the-peg or custom-made, to more expensive kilts, sewn to-your-measures in Europe or in America.
Vendors of accessories.
Tartan-mills and tartan-finders.

Kilt and skirt forums, non-commercial home pages, blogs, picture galleries, videos, articles in print media and on the internet, men in kilts and skirts on stage and on the catwalk.

At a glance, find out what is new, has been changed or has been deleted on the D2K site since your last visit.

Back to start - choose your language