Not all men, tired of always wearing trousers, think the traditional kilt is the best skirted garment, not even if their motives are exactly the same, the unique freedom, more variety to an otherwise somewhat boring wardrobe, health aspects and the difference it makes, being just little bit different.
They might prefer a garment less Scottish and with fewer rules to follow.
Or they may already be wearing traditional kilts, just wanting also other options, depending of situation or task to do.

By Scotweb you can also buy some nice made-to-measure Camouflage Casual Kilts in four different patterns. The price is only £125 delivered at your door step (comes with free worldwide shipping). Or a Denim Casual Kilt.

Paul Henry Kilts (England) can not only make you a traditional tartan kilt sewn by hand but also kilts in tweed, linen, denim, and cotton. 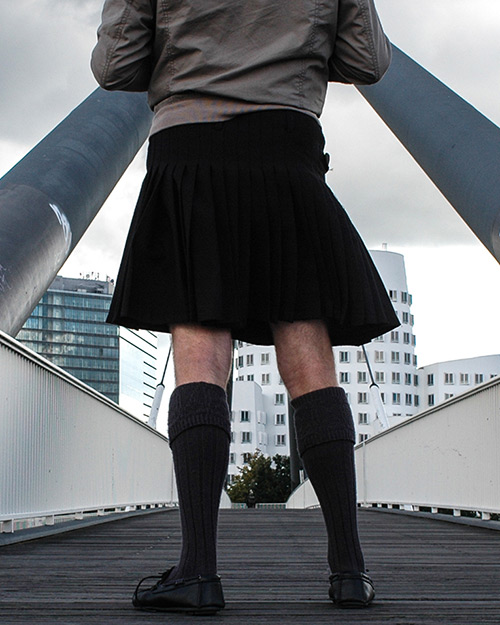 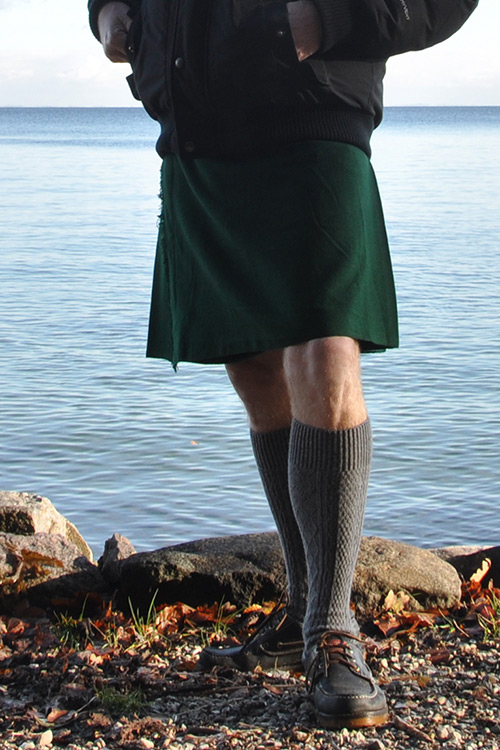 Going for something even more casual, easier to maintain, something not connected with rules for wearing and with no need for special accessories?
A utility kilt might be what you are after.

The utility kilt is less than 20 years on the market.

In 2000 Steven Villegas, founder of Utilikilts.com in Seattle, launched a skirted garment for men. He positioned it as a kilt and named it Utilikilt.

It soon proved successful, competitors emerged and the modern kilt or contemporary kilt was a reality. Today these kilts are often referred to as utility kilts.

Neither the Utilikilt itself nor its competitors had or have much resemblance with traditional kilts. They do have pleats on the back and a front apron which, however, is narrow compared with that of a traditional kilt. Where the latter is a 9-15 o’clock thing, it is on utility kilts rather 10 to 14 or 10.30 to 13.30 only.
They are solid coloured or camo, made of cotton or denim instead of wool, and last not least they have big pockets, typically of the cargo type. Due to their construction they are closed by means of buttons, rather than buckles and straps. Therefore they do not have the flexibility in waist size, known from the traditional kilt.
They will go into the washing machine, however, which is a good thing. With a few exceptions these kilts have blue jeans functions. Despite no tartans and different in design these kilts have also become popular with men of Scottish descent, which to me indicates that to them the kilt as a garment may be more important than heritage. And nothing wrong about that.

Today the Utilikilt has gained almost iconic status. And prices have increased. The cheapest Utilikilt, the Mocker, is $200.

If you live in an EU-country you may, due to high shipment cost and taxes, end well over 300 Euro. Utilikilts offer three different lengths, 21.5, 23 and 25” 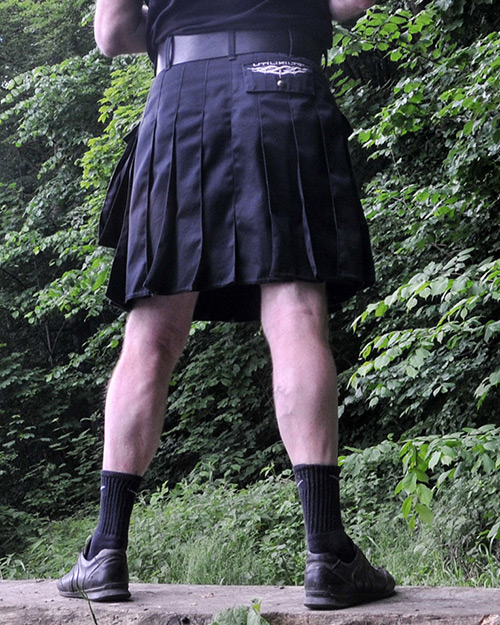 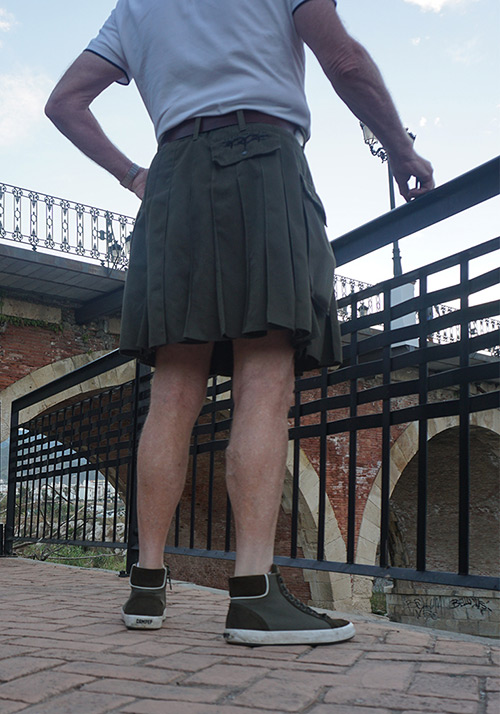 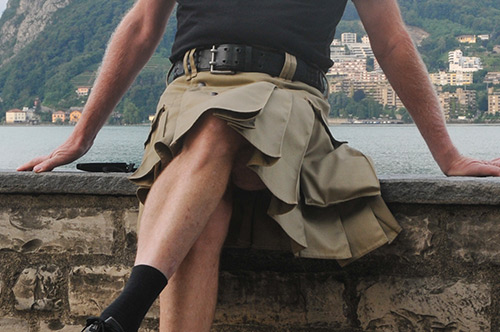 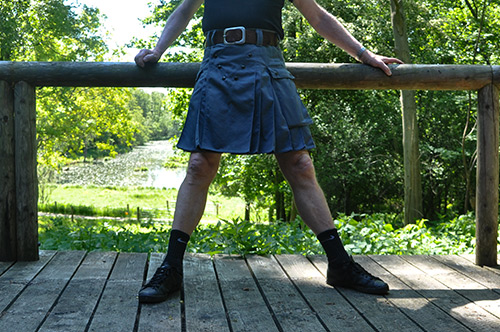 All pictures above show the Original Utilikilt which is no longer available. I prefer the original look over the new “switchback”-design, but judge yourself. If the new one sells better, it is better.


As much as I like these kilts, as much would I prefer that they came with less pockets – if any – and that they would have less metal buttons - if any. Probably the intention has been to give the skirted garment a manlier note. But a traditional kilt, which definitely is regarded manly, has none of this kind.

Therefore I like the Utilikilt Mocker with its inside slide pockets, which today is the cheapest Utilikilt. 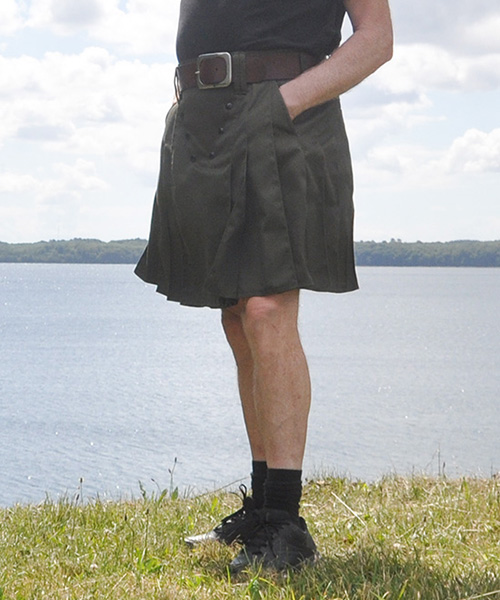 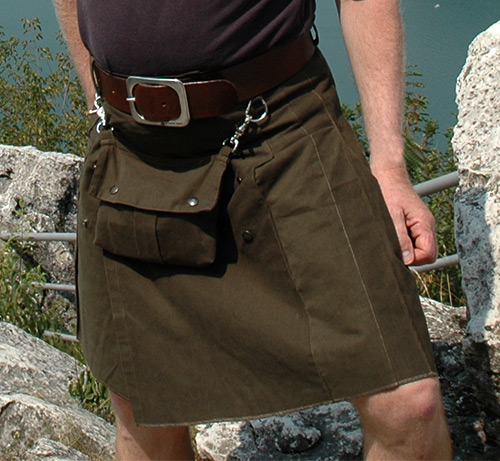 Amerikilt, one of the first utility kilts one the market is now history. It had no cargo pockets but came with a detachable sporran and in three different lengths. Since years my favourite utility kilt.

The increasing prices on Utilikilts and other premium brands and the fact that a market for this type of kilts exists has opened up for a segment of cheap utility kilts, typically made in Pakistan and China. They are sold by several kilt shops in America and Scotland. The quality is not on the same level as for example the Utilikilt but certainly not bad. They often come in a lot of different designs, many of them, however, not being ones that most men would wear. 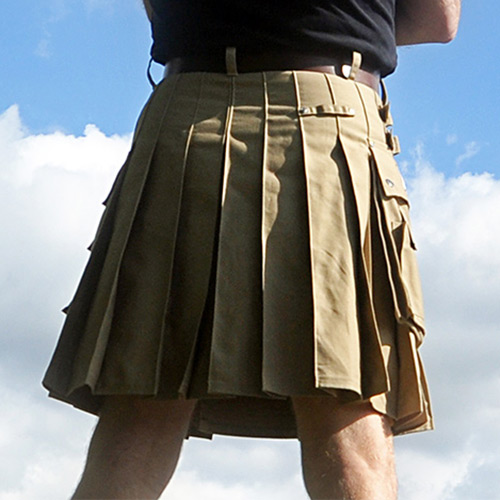 When you buy a low priced utility kilt from a vendor in USA, UK or where ever, you don't know who has manufactured it. Chances are it comes from Expo International, only one, however, of several B2B manufacturers, all of them concentrated in the city of Sialkot in Northern Pakistan. The picture shows one of the Expo International utility kilts, which I'll wear a lot.

Union Kilts, a British enterprise, has launched a kilt with slide pockets, called Hill Walker. It has two trouser front pockets, comes in four different colours and with a 23" standard drop, which I prefer over the 24" seen on most other utility kilts.

Judged from pictures the Hill Walker seems to be a high quality kilt. And then there is the price, no more than £50. Only freight comes on top (as long as Brexit is not effective). It looks like a bargain.

Union Kilts also have more traditional utility kilts in their range, meaning with cargo pockets. Unfortunately the owner of Union Kilt has announced that he has desided to retire and that his business is for sale.


What about the length?

No rules exist. Utilikilts and Amerikilt are available in different lengths, as mentioned above. Affordable utility kilts, however, mostly have the standard 24" drop, despite a utility kilt might sit lower on the hips than a traditional one.
But now with some American vendors you can actually have affordable kilts made to your wishes.

One possibility is Kilt & Jacks. 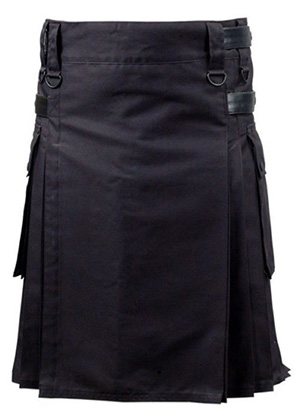 So no rules, why don’t experiment a little bit? Have it cover your knees or have it end above them? Just be aware that too long looks femme, too short girlish.

No rules. No need for a sporran. The only thing needed might be a wide belt.

In summer it is easy. Short socks or no socks look great. But when it’s cold? The natural thing to wear would be kilt hose. But if you don’t wear a traditional kilt, you won’t have them.
Utilikilts, which must be said to be a specialist, sell knee socks to go with their kilts. And they are not unfamiliar with the thought of men wearing tights. As they say,

They also offer some really long socks, 45” = 114 cm which shall certainly look like tights or leggings. So obviously they are manly enough, at least according to the Utilikilt people.


No socks, short socks, knee high socks, pulled up or scrunched down, kilt hose, tights or leggings, it all seems to work. But judge by yourself, and wear what you like. 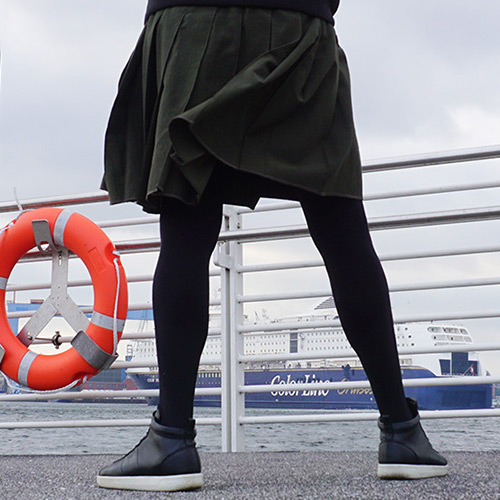 Could you as a man wear a skirt? Well, the existence of utility kilts with their non-defined designs are part of the answer, so YES, under circumstances you can. And why should a kilt or kind of kilt be the only possibility? Just think about men in The Roman Empire in their long dress-like togas or tunicas, resembling mini-skirts. Besides, skirts designed for men are to have.

What to find on the Dress2kilt site

Have you ever been thinking of wearing a kilt, but have given up, because you were not Scottish? You must not be Scottish. You can be any nationality, any colour, and any belief. Only you must be man enough. The objective of the Dress2Kilt site is making you wear a kilt whenever YOU feel like it and appropriate. Therefore Casual First.

Who will wear a kilt? Don’t I have to be Scottish?? Why wear a kilt? Where and when to wear it? What’s the difference between being Scottish and not? What shall other people say? Is it true? How did the webmaster start wearing kilts? These and many more questions are answered.

Is the kilt a skirt? What makes a kilt? What about fabric, yardage, and pleating? Can I wear a tartan without beloging to that clan? Must a kilt be made in Scotland? How about imported kilts? Should a kilt be made to your measures or should a ready-made do? How much can it cost?

Which kilt and how and where to buy it?

Purists will say that no less than a 16 oz. 8 yard wool kilt, sewn by hand by a skilled kilt maker in Scotland or equivalent place will do. But that’s a bad advice, at least unconsidered. What YOU and others need must always be reflected by the intended use. If you are going to wear your kilt at weddings and anniversaries only, they might be right. And if all of your business suits are labelled Armani, Ermenegildo Zegna or the like, and your jeans Hugo Boss, they are probably too. But, talking casual wear in your spare time, they are not. It is overkill. So what do you really need and how and where to get it?

Don't waste your money on things you don't need. A dirk in the belt, a bonnet, feathers, cap badges, and a playd over your shoulder? Absolutely NO. Too much national dress and should look rather ridiculous if worn by a non-Scott. Don't get ripped off on accessories. Which ones do you really need?

Let’s assume you have just received and unpacked your first kilt and the accessories you ordered. How to handle all the unfamiliar things, the sporran, the belt & buckle and kilt socks ect.? And what else to wear with your kilt? Now being ready for taking your kilt out into public for the first time, is there anything you should mind? After all a kilt is something very different compared to trousers, just the way it looks and how it feels, wearing it. And where to wear it?

Not all men, tired of always wearing trousers, think the traditional kilt is the best skirted garment, not even if their motives are exactly the same, the unique freedom, more variety to an otherwise somewhat boring wardrobe, health aspects and the difference it makes, being just little bit different. They might prefer a garment less Scottish and with fewer rules to follow. Or they may already be wearing traditional kilts, just wanting also other options, depending of situation or task to do. How about you?

Could you as a man wear a skirt? Well, the existence of utility kilts with their non-defined designs are part of the answer, so YES, under circumstances you can. And why should a kilt or kind of kilt be the only possibility? Just think about men in The Roman Empire in their long dress-like togas or tunicas, resembling mini-skirts. Besides, skirts designed for men are to have.

Kilt and skirt forums, private home pages, blogs, picture galleries, videos, articles in print media and on the internet, men in kilts and skirts on stage and on the cat walk etc.